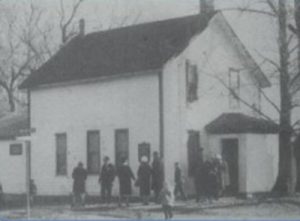 The parish of St. George’s, Kitchener, was designated as a separate congregation in the Diocese of Huron by the Right Reverend George N. Luxton in January 1957. The first church building was a former house on Highland Road opposite the present Sobeys shopping plaza, now replaced by a small apartment block. Prior to this occasion, Sunday School meetings had been held on the site since Advent Sunday, 1955 as well as church services since July, 1956. From 1957 to 1962 the parish was served by a succession of three priests, all of whom divided their time with other parishes.

The first full-time rector was the Reverend Roy Webb who arrived in November 1962, just in time to participate in the dedication of the older part of the building on our present site on Fisher Hallman Road. This first building, presently preserved in the chapel, narthex and church offices, was originally St. Luke’s Lutheran Church and had been purchased from the Lutheran Synod for $1.00 when its original congregation outgrew its space. It was moved physically, piece by piece from the Sunnyside area in the eastern part of Kitchener and re-erected on the Fischer Road (as it was known then) site. The memorial windows of the Lutheran church were included and may be seen in our present chapel and in the narthex. As the suburbs spread westward from the Old Forest Hill area to Forest Heights and the numbers of worshippers grew, by the 1970s the facilities became inadequate. The Reverend Sid Lupton replaced the Reverend Webb in 1973 and presided over the parish for a number of years while we were once again linked to Holy Trinity church on Wilson Avenue. By 1979 the parish again became self-supporting and in the meantime had established a Building Committee to plan for expanding the facilities. The Reverend Bob Bennett was appointed rector in 1980 and under his guidance, the Building Campaign greatly increased its activity and with the unanimous support of the parish vestry and the financial assistance of the Diocese a new addition was linked to the old church providing considerably expanded space for worship, Sunday School, meetings, kitchen etc. This structure, which is now our principal worship space, was dedicated on November 21, 1983. On May 1, 1986, the Reverend Donald Ford was appointed rector and by 1997 the final debt owing on the building was retired. This meant the church could, at last, be consecrated and on October 19, 1997, Archbishop Percy O’Driscoll presided over the consecration service. On August 1, 1999, the Reverend Don Ford moved on to St. John the Evangelist church in London and the Reverend Elizabeth Appleyard served as Interim Priest until the arrival of the Reverend Mark Gladding on February 1, 2000. During the Reverend Gladding’s term as rector a considerable range of improvements were made in the facilities of the parish – the addition of a fine rebuilt and expanded pipe organ in the church was particularly notable. A Memorial Garden in front of the church, licensed specifically to receive the cremated remains of parishioners, was created and, on a more practical note, the parking area was completely paved and suitable lighting provided.

Our past Rector, the Canon Don Davidson encouraged us to focus particular attention on congregational pastoral care and on community outreach, notably through playing a leadership role in a Habitat for Humanity project in Kitchener. As the Anglican Church is now in communion with the Evangelical Lutheran Church in Canada we have been frequently coordinating worship services and social events with several nearby Lutheran congregations.